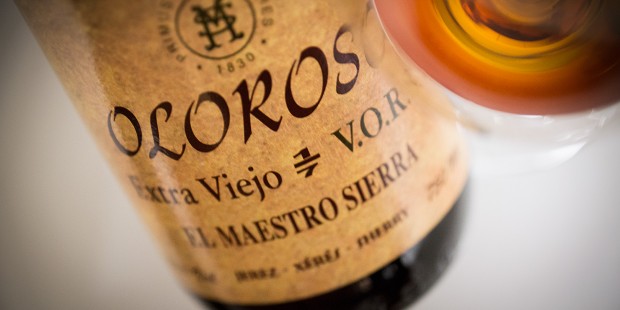 Oloroso is aged in the absence of flor, in an oxidative way. This style of sherry starts from a selection of heavier, more full-structured musts than a Fino. Usually it is produced from a second pressing of Palomino grapes. After fermentation, the young wines with a thicker body will be destined for maturation as Oloroso sherry.

To create an Oloroso the base wine will be fortified to 17 or 18 degrees which makes it impossible for flor yeasts to survive in these casks. Due to evaporation known as merma (+/- 3-5% each year), the resulting Oloroso will grow more concentrated to around 20-22 degrees.

After fermentation the base wines will be classified with chalk signs on the cask, according to their finesse. Delicate wines suited for biological ageing were given a raya, a stick or vertical line. Later some leaves were added to form a palma. The heavier wines, more suited for oxidative ageing, are given a circular mark ‘o’ for Oloroso. Even courser, slightly unbalanced base wines would be given two or more rayas. These will age as olorosos of lesser quality, sometimes used for blending purposes, distillation or the production of sherry vinegar.

Oloroso sherry casks are highly sought after by the whisky industry. It adds a lot of richness when spirits are matured in casks that were seasoned with Oloroso.

For more information on Oloroso sherry, check the page on the website of the Consejo Regulador of the sherry region.

Though naturally dry, the higher strength and full body of an Oloroso (caused by glycerol) will give it an impression of roundness. The glyceric side can even be mistaken for a subtle sweetness, even in a technically dry wine. On the other hand it may be lightly sweetened by adding a bit of Pedro Ximénez (Amoroso or Abocado sherry). Some of the best olorosos have historically been lightly sweetened but tend to lose this sweetness as they mature further. Nowadays the rules of the Denomination of Origin state that a wine needs to be fully dry to have Oloroso on the label.

The classic pairing for an Oloroso would be red meat and game, but it will also be lovely with well-aged cheese. Read more about pairing Oloroso with food. It is served around 12-16°C.