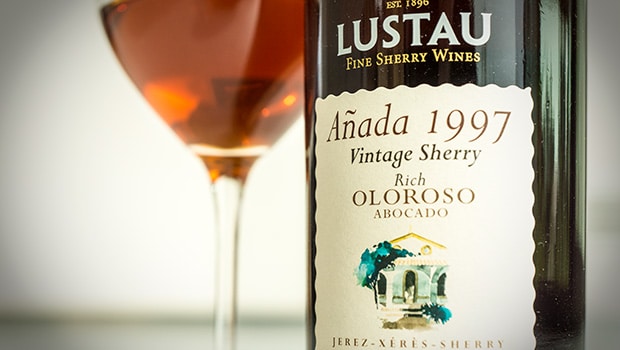 Vintage sherries or añadas are rare – they go against the regular flow of the solera system. Some of them are even produced quite differently and come closer to port wine than they do to other sherries. I’ll come back to this in a specific article about vintage sherry.

The Lustau Añada 1997 is the youngest of the Lustau vintages so far (after 1989 and 1990). It was made from grapes cultivated in their Montegilillo vineyard, set in the Carrascal area (North of Jerez) and matured in American oak for more than 13 years until it was bottled in December 2010. It received a gold medal at the 2013 IWC competition and silver at the IWSC.

The label of this sherry says Rich Oloroso abocado. Abocado means smooth and it usually indicates that the (originally dry) Oloroso wine has been sweetened by the addition of some Pedro Ximénez after maturation. In this case however, it indicates that the grapes were partly dried in the sun before pressing (soleo) and that the fermentation wasn’t completed – during the fermentation process, the must was strengthened to around seventeen degrees in order to retain part of its natural sugars. These partially fermented wines will develop into a kind of naturally sweet Oloroso (or a kind of Port wine if you like, which is made in the same way).

Availability: difficult to find, especially outside of Spain. Around €25-30 for a 50cl bottle.

Summary: An excellent wine, a bit of a hybrid between Oloroso, Pedro Ximénez and Port wine. Some unique aromas on the nose and a firm spicy edge on the palate. Very complex yet so easy to drink! Recommended.