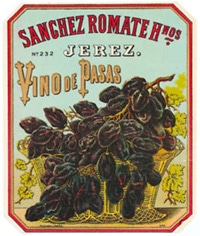 Soleo or Asoleo is a process of sun-drying grapes before pressing them. In the D.O. Jerez-Xérès-Sherry it is primarily used for Moscatel and Pedro Ximénez grapes.

The soleo usually lasts one to three weeks, but it depends on the weather conditions and the type of wine you’re intending to make. Even for some Oloroso the grapes are sometimes exposed to the sun, though rarely longer than 24 hours (e.g. Lustau Oloroso abocado 1997). However this is nowadays less common as the soleo is such a labour-intensive work: the grapes are carefully spread out by hand and turned over once a day, while removing any unhealthy bunches.

The grapes are basically dried in the sun, in open air, after placing them on esparto (straw) mats, usually round mats called redores.  At night they are also covered by mats if dew is expected. Free flowing air is essential, as is a low humidity to avoid the rotting of the grapes. This is exactly why today the majority of PX grapes are brought in from the Montilla-Moriles area, where the dry mountain climate lowers the risk of problems.

Pressing these “raisined” grapes or pasas is rather more difficult than for fresh grapes, so usually it is done in vertical presses with the esparto mats in between layers of grapes. The high sugar concentration will slow down or even prevent spontaneous fermentation. The new wine will quickly be stabilized at around 10 degrees of alcohol and left to settle for a few months before its final fortification.

No one seems to know when the soleo process began: it probably goes back to Roman or Greek times, but other sources claim it was introduced by the Moors. We do know that it was certainly used by all sherry producers in the early 1800s. When fortification was not a widespread practice, Palomino grapes underwent some asoleo as well, as Palomino naturally produces a low alcohol must (nowadays easier to control / solve). In the past it was common to add gypsum (yeso) to the grapes, which results in a clear must with a slightly higher acidity. It is a harmless additive, still legal in hot winemaking areas. However nowadays the acidity is usually corrected by adding tartaric acid.

Grapes loose about 10-15% of their weight in water. Contrary to what you may think, the soleo process actually reduces the total (absolute) amount of sugar, but with less water the proportion of sugar is increased (from 300 grames per litre of must to around 450-480 grams per litre). It also changes the viscosity of the juice and lessens the amount of malic acid and tannins. There are also some chemical changes which lead to different aroma and flavour characteristics.