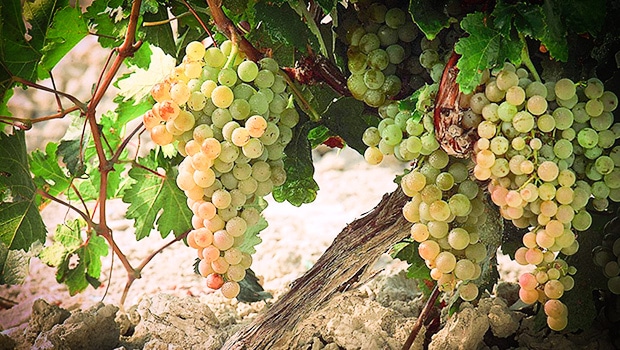 The production of sherry is based on three grape varieties: Palomino for the dry types of sherry, Pedro Ximénez and Moscatel for sweet versions. Even though 19th century documentation indicates that up to 250 varieties of grapes were planted in the region at that time, these three have always been the favourite grapes for the finest wines. They’re all white grapes.

Nowadays more than 98% of the grapes grown in the D.O. Jerez-Xérès-Sherry are Palomino (with 1% Moscatel and 0.5% PX), for two reasons. The main reason is the decline in sherry sales, and oversupply which caused only the best vineyards to survive – Albariza vineyards which are perfect for Palomino. The lower-grade terrains have recently been planted with sunflowers or used for solar power. Coupled to this is the fact that Moscatel and Pedro Ximénez are now bought from vineyards in neighbouring areas, with specific soils and climatic conditions.

Note that although Palomino has always been a highly regarded grape, almost all sherry wines had been plurivarietal until the 20th century. Perruno / Zalema, Mantúo Pilas, Uva Rey, Beba and Cañocazo… most vineyards contained different grapes and they were mixed during fermentation. After the Phylloxera crisis of the 1890s most vineyards had to be replanted and most producers went for the best option they had: Palomino Fino. This led to a more generalized character in wines and recently we’re seeing some experiments that try to bring back the wines of the pre-industrial era.

Commonly called Palomino, the more precise name is Palomino Fino, to distinguish it from its ancestor, the less yielding Palomino Basto, also called Palomino de Jerez. It is said to be named after Fernán Palomino, a knight of some importance during the Reconquista.

The Palomino grape is known by several names, the most common being Listán. In other parts of Spain, it is simply called Jerez, in the Portuguese Alentejo region it is known as Perrum, in South Africa as Fransdruif, on Madeira they say Listrão.

The vine has dark-green leaves and grape bunches are generally long and cylindrical in shape, with medium-sized, thin-skinned berries which are yellowish green in colour. The grapes, which ripen early in September, are juicy, fragile and moderately sweet (around 11º Baumé) with colourless juice. It is a particularly high yielding variety. Palomino juice has a relatively low acidity, especially of the malic variety, which makes the base wines oxidise easily – perfect raw material for sherry!

When used to create white table wines, Palomino doesn’t really shine. It results in rather dull wines lacking in fruit and acidity (although the unfortified flor wines called Florpower are definitely worth looking for). Palomino grapes are very neutral in aroma, which is a downside for table wines but a great asset in sherry: it is the perfect grape to transfer the typical chalky, coastal characteristics of the Albariza soil into the dry types of sherry.

Together with Palomino, Pedro Ximénez is another very traditional variety used throughout the Jerez region since ages. Its greater sugar content (around 13-14º Baumé) and higher levels of acidity are great for sweet wines.

The Pedro Ximénez grape variety is believed to be introduced in Spain by the Dutchman Pieter Siemens, a soldier serving in the navy of Carlos V, who supposedly took the grape from the Rhine area and transported it to the South of Spain in the 16th Century. This story is debated: no similarities have been found with current Rhine varieties and it seems unlikely that a grape could survive in such different climates. In other parts of the world, Pedro Ximénez grapes are also found, but again some of them only share the name, not the ampelographic characteristics.

Sometimes the grapes are just picked very ripe, but most of the time P.X. grapes are dried in the sun on straw mats. In general this process (called soleo) takes between 5 and 15 days – it makes the water evaporate from the grapes which means the relative sugar contents gets higher. Although traditionally produced in the Jerez area, PX musts are now mostly bought from partners in the neighbouring area Montilla-Moriles, where the humidity is lower. This makes the drying process more effective and the grapes less prone to rotting.

Soleo, the process of drying grapes in the sun

The juice from Pedro Ximénez grapes has a sugar content of up to 300g/l. It will not start to ferment in a natural way – specific yeast types have to be selected, which are tolerant to high levels of sugar. As soon as a natural alcohol level of 5% is reached, neutral grape spirit will be added and fermentation will stop. The resulting base wines of around 15% will then be shipped to the sherry triangle for maturation in a solera.

Moscatel is short for Moscatel de Alejandría (Muscat of Alexandria). This grape variety originated in Africa, but it is now cultivated in many vine-growing regions throughout world. In the Jerez region it is planted mostly in the area around the town of Chipiona, where there are lots of arenas, sandy soils which are perfect for this type of grape.

Like Pedro Ximénez, most of the Moscatel grapes are dried in the sun (soleo). This is called Moscatel de Pasas (raisin Moscatel). However they are bigger grapes with thicker skins, so they won’t concentrate as much as PX.

The resulting Moscatel wines usually display a lot of floral aromas and a honeyed, raisiny palate. Sometimes it is blended with a bit of Pedro Ximénez to create a deeper character.