I know a lot of people out there are still struggling with the different types of sherry. Why is a Fino different from an Amontillado or a Pedro Ximénez, or what makes a Pale Cream different from a regular Cream? To get a detailed insight, we would need to explain how each type is made and how the production process differs from other types. We’ll get into this further, but I’ve already tried to sum it up in a little diagram. Note that there are seven columns and each column shows the flow of one specific type of sherry:

Basically it starts with the grape variety. All dry sorts of sherry wines are produced from the Palomino grape (also referred to as Listán). It thrives well on the typical albariza soils of the Jerez area. These grapes are harvested fresh and they are pressed almost immediately. Usually this is done in different stages, each with a different pressure and different specifications of the resulting mosto or must. The first pressing (primera yema) produces the best grape juice, the last is only suited for distilling into brandy.

For naturally sweet wines, two other varieties are used: Pedro Ximénez and Moscatel. These are left outside in the Andalusian sun for several hours to several days until the grapes lose some of their moisture and have a higher relative sweetness. The grapes will resemble raisins when they are crushed – higher pressure is needed.

After filtering the musts, correcting the pH and treatment with sulphur dioxide to prevent bacterial contamination, the grape juices will start to ferment naturally. In the old days this was done in wooden barrels (Valdespino still produces its wines that way) but nowadays most bodegas use huge stainless steel tanks that are heated to 23-25°C. Usually a small amount of already fermenting must (pie de cuba) will be added to speed up the initial process. After that, two phases of fermentation (tumultuous and slow fermentation) take place. Musts of Palomino grapes will keep fermenting until nearly all of the available sugars are processed into alcohol – this will lead to a “base wine” ready around the end of Autumn. On the other sweet musts of PX and Moscatel will be brought to 10% alcohol very early in the process, in order to retain a lot of the sugars. The wine is left to settle and slowly ferment during the winter months. It it is then fortified to its final strength of 15-18%.

At the end of the fermentation process, a layer of flor will naturally occur on these base wines, due to the specific climate conditions of the Jerez area.

After fermentation the lees will be filtered off and the musts will be classified. The finest, most delicate examples will be fortified to 15 – 15,4% vol. alcohol by adding neutral grape spirit (produced in the La Mancha region, from Airén grapes). The delicate musts are intended for biological ageing, i.e. ageing under a layer of flor, without contact to oxygen. It is called biological because it is the natural way. The slightly courser base wines, which show a less elegancy at this stage, will be fortified to 17 – 18% vol. alcohol. This kills any existing flor and will make sure it doesn’t come back. From that moment, the wine will mature in an oxidative way, with contact to the surrounding air. The result will be an Oloroso.

Naturally sweet wines will always be fortified to a higher degree as flor is not wanted in this type of sherry.

Ageing in a solera

After the first fortification and a short maturation, the base wines or sobretablas will be classified again. The different categories will then enter a solera, an array of barrels that are arranged in a certain hierarchical way, with the younger wines partially replacing the older wines that are taking out. This is explained in our article about the solera system. Biological ageing will result in a Fino or Manzanilla depending on the location, while oxidative ageing will produce an Oloroso. In accordance with the Regulations of the Denomination of Origin the ageing of sherry wines must last at least two years (this used to be three years), enough time to allow the wines to develop the distinctive characteristics of each type.

Nowadays the preferred type of cask is the American oak 600 litre butt, also known as a bodega butt. It is never filled to the top, thus creating a surface area upon which the flor may develop.

Note that along the way, the veil of flor can die and wines that started their life as a Manzanilla or Fino can gradually shift towards oxidative maturation. This can occur after a certain age (because the nutrients in the base wine that keep the flor alive have been consumed) or because the cellarmaster decides to fortify the wine again an deliberatly kill the flor. This produces the intermediate types of sherry: Amontillado and Palo Cortado (technically similar wines but with slightly different aromatic properties).

When sherry is taken out of the final stage of the solera (called the saca), it will usually be filtered and cold stabilized to make sure the wine will keep most of its features until it is opened (although there is a shift towards minimal post-processing these days, see en rama sherry). Also, as sherry has a defined minimum strength, it can be fortified again in order to meet a certain alcohol volume. It will also be blended: the output of different casks is put together and mixed. After these steps, the wine can be put in bottles and distributed to different parts of the world.

Note that there are naturally dry sherries as well as naturally sweet sherries (Pedro Ximénez and Moscatel), but it’s also possible to artificially sweeten sherry wines after maturation, by adding a kind of raisin syrup or by blending a dry wine with a naturally sweet sherry like Pedro Ximénez. This produces wines that are labeled Pale Cream, Medium, Cream or Dulce. Sometimes these sweetened wines are put back into barrels in order to ‘marry’ the different components, and they are only bottled after a while.

ps/ Thanks to Denis Shumakov for giving me the idea of a flowchart. If only I could read Cyrillic… 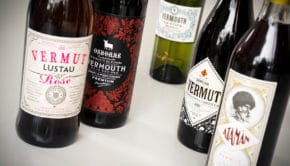