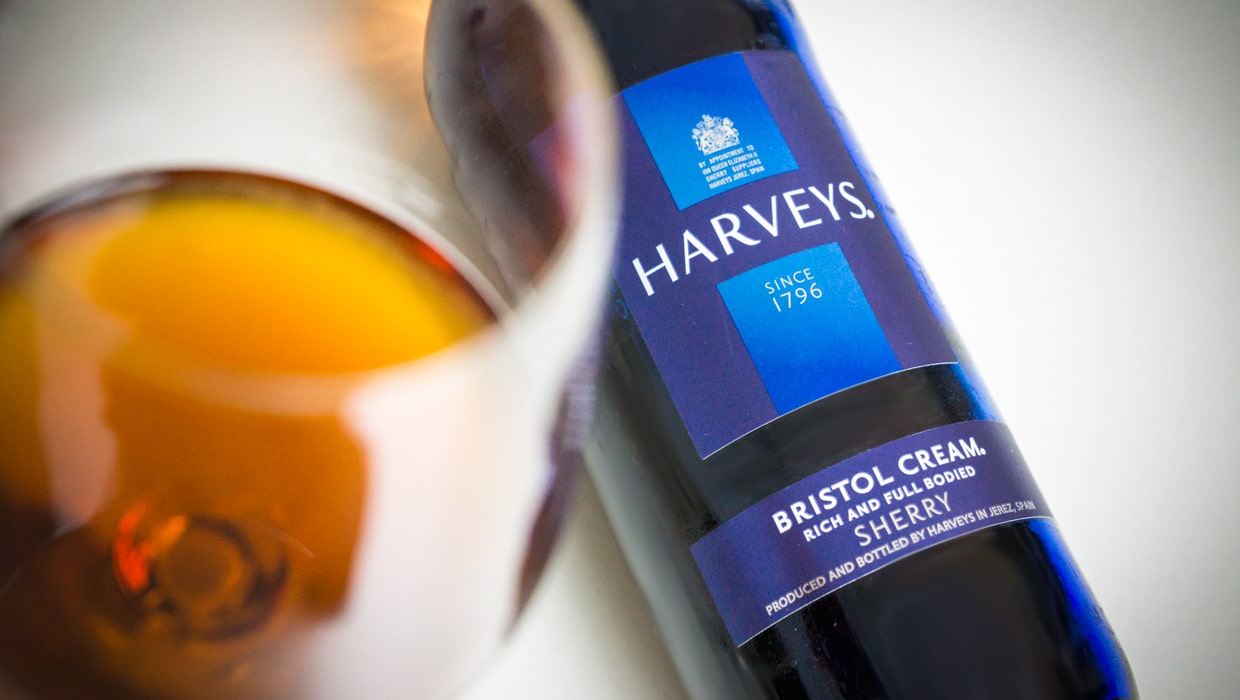 Cream sherry is the general name for different kinds of sweetened sherries, usually produced by blending a dry wine like Amontillado or Oloroso with naturally sweet Pedro Ximénez or Moscatel wines. Lesser quality Cream sherry will be sweetened (and coloured) by adding grape must and/or a vino de color, a ‘colouring wine’ which contains Arrope, cooked down and caramelized grape must. Medium sherry is half sweet. Sweet sherry used to be a hugely popular category, especially in certain export regions, but it is slowly losing ground in favour of the drier styles.

In Spanish this category of sherry wines is called Vinos Generosos de Licoror liqueur wines. They are separate from the naturally sweet wines or Vinos Dulces Naturales.

The Cream / Medium category is named after a hugely popular product called Bristol Cream from Bodegas Harveys. Around 1860 they invented a kind of thick, sweet blend that originated in Bristol but conquered the world. Since the 1950’s this is the top selling sherry worldwide. Nowadays it’s still commonly found, but it is slowly becoming the symbol of an old generation of sherry drinkers that are not really looking for the dry, more authentic wines.

Once called abocado or amoroso, sometimes rich or dulce, the common name for sweetened sherry is now Medium and Cream

Don’t just ignore the category of sweetened sherries though. The best examples still rely on well-aged Oloroso or other dry types for most of their character, with Pedro Ximénez only added as an enhancement (sometimes to balance out the rough edges of long ageing in wood).

The best examples of sweetened sherry (e.g. Gonzalez Byass Matusalem or the Harveys Oloroso V.O.R.S.) are old, venerable wines that are much more balanced than the cheap commercial types. The best sweet sherries are the ones that were sweetened long before bottling. That way, the sweeter wine will blend nicely with the dry one, creating a harmoniously integrated end result that is usually off-dry rather than thoroughly sweet.

Note that you can have sweetened Fino, sweetened Amontillado or sweetened Oloroso, but a lot of sweetened sherries will be blends, compositions of multiple styles. Usually there’s some Fino and Amontillado as a base wine, with Oloroso to add depth and Pedro Ximénez to add sweetness. Most of these blends are mixed right before bottling, but again the better examples return to a solera to mature further and integrate their flavours.

There are different labels for sweetened sherry, based on their sugar content and flavour:

Another style worth mentioning is East India Solera, bottled by Lustau and named after the tradition of maturing wines in the holds of ships that sailed for the East Indies (this practice was not exclusive to sherry, also Madeira, whisky and other spirits were treated this way). The motion of the ship and the specific climatic conditions would create a softer, more gentle style of sherry. Today the style is recreated by blending some Pedro Ximénez with Oloroso and storing the resulting blend in the warmest parts of the bodega.

Because of its sweetness, it should be served chilled, between 10 and 12°C. It can be had in a wide variety of ways: with fruit salads, sweet apple pie or other kinds of pastry, after dinner on the side with a coffee, or with paté, foie gras and mature cheese. Some people tend to drink it as an aperitif, usually with ice, but this will not suit the purpose of an aperitif to start the appetite very well.