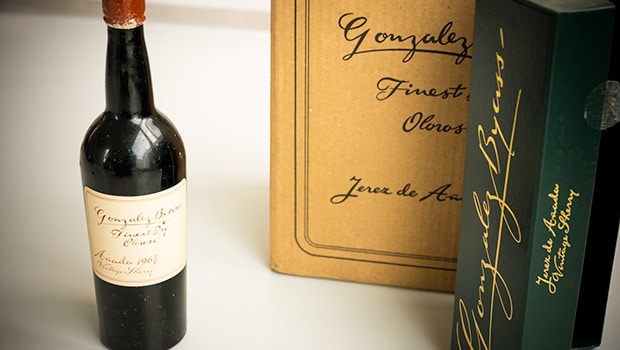 Vintage sherry or Jerez de Añada is extremely rare, so rare that a lot of introductions to sherry wines will simply tell you it doesn’t exist. Obviously the Solera system is essential to sherry and accounts for the vast majority of production, but vintages do exist. In fact before the invention and development of the solera principle in the second half of the 18th century, all sherry was created as a vintage wine, and the añada concept was still widely in use until the early 20th century. It was then largely forgotten for the sake of consistency, but recently there is a renewed interest in vintage sherry and the static development (without blending) in general.

Añadas don’t enter a solera, the casks are filled and then just sit there without being mixed with others casks or without being periodically refreshed with younger wine. Almost every bodega will have a few butts that are kept aside, or sometimes a small solera that is not (or very rarely) refreshed. Originally the main purpose for this was to have a back-up: the wines inside these butts will age much quicker than a solera and this old wine can act as a high quality support for soleras that need a bit of tweaking. However until recently most bodegas didn’t market these wines.

Two large bodegas, who had been putting away a fraction of their butts for separate maturation, started to commercialize vintage sherry in the 1990’s: Gonzalez Byass and Williams & Humbert. Over the last few years, other bodegas have jumped on the wagon as well, Lustau, Tradicion and Hidalgo among others. 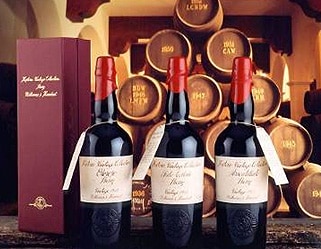 Wines that are intended to become añadas are usually produced from the fuller bodied musts. A slightly sweeter wine withstands the oak influence better, and enough alcohol needs to be present. Until recently most vintage sherry would mature in the oxidative way,  producing Oloroso, Amontillado, Palo Cortado or one of the sweet types.

Since 2015 we are also seeing vintage Fino and Manzanilla wines on the market which are obviously limited in age, as they cannot refresh the wine to keep the flor alive.

The alcoholic strength of old vintages goes up to around 20-22°. Oxidative maturation will start at around 18° but with evaporation the wine will gradually become more concentrated. Usually they will be racked into successively smaller casks over time to balance the exposure to oxygen (and limit the merma, the angel’s share which is lost through evaporation).

Any cask that is intended to become a vintage sherry will be sealed with wax by the Consejo Regulador, to prevent the bodega from opening it and possibly topping up the contents. The bodega can request someone from the Consejo to come by in order to check the wine, or prepare it for bottling.

Wax seal on a cask of añada sherry

Gonzalez Byass has been selecting some 200 butts of sherry every year, from a total harvest of around 20.000 butts, that are kept aside as vintage casks. In 1994 they introduced their Vintage Collection to celebrate the 150th anniversary of the first shipment of Tio Pepe. Since then, a different vintage has been selected and put on the market. All of them are wines that haven’t been fined nor filtered and that have been bottled by hand. Bottles in the Gonzalez Byass Vintage Collection are small pieces of art: they are ‘Jerezana’ style bottles, similar to those used around 1850. They have a handwritten label, they’re individually numbered and signed by the chairman of the company. They also come with a handwritten letter with information about the wine. 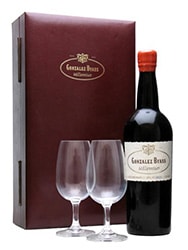 In 2015 the Palo Cortado 1987 was presented, a limited release of 987 bottles. Since then Gonzalez Byass also released vintage Fino sherries and other añada wines.

Williams & Humbert has been putting aside one butt of every vintage since 1920, and in the past few decades they’ve put aside up to 50 butts each year. All of them come from the same vineyard: Alamo in the Balbaina area. In the early years these wines were only available through auctions and selected retailers, in a series called Historic Vintage Collection: Oloroso 1952, Palo Cortado 1955, Palo Cortado 1962, Oloroso 1965, Amontillado 1972, Oloroso 1982, etc. Nowadays the availability is slightly better – unfortunately most of them are very expensive.

Early 2015 this bodega recently presented the first vintage Fino in the modern history of Jerez, the Fino En Rama 2006 (note that Bodegas Alvear in Montilla-Moriles was creating vintage Finos since the late 1990s). The 2006 Fino was a single harvest wine, aged in a static maturation process. Other vintages have appeared since then. In 2016 Williams & Humbert released the Colección Añadas, a series of three Olorosos (2003 / 2009 / 2012), two Finos (2009 / 2012) and an Amontillado (2003), all vintage sherries. They were sold as a complete lot of 50 cl bottles and were extremely limited. Occasionally new bottlings are appearing – it is clear that the bodega has a growing interest in añada wines.

Vintage sherry from other bodegas

Garvey has vintage sherry from between 1989 and 2003, maybe more. As far as I know, only the Oloroso Añada 1989 has been released, right before the company fell vitcim to the Nueva Rumasa crisis.

Callejuela presented the first Manzanilla de Añada 2012, which is bottled one cask at a time from a small set of 11 casks.

Hidalgo – La Gitana has an Oloroso añada 1986, a vintage sherry from 12 old barrels filled in 1986 from the El Cuadrado vineyard. The wine matured for 20 years in the San Francisco bodega and 2800 bottles were filled in 2007.

Since 2000, Valdespino has also been putting away casks for Añadas, one each year. In May 2016, two vintages (Palo Cortado Macharnudo 2000 and 2001) were released on a very small scale, possibly a test case for more widely available releases.

Also in the neighbouring D.O. Montilla-Moriles bodegas have released many vintage wines, such as the Don PX wines from Toro Albala or the Fino En Rama from Alvear.

Some producers are (sometimes deliberately?) highlighting other years on their labels, indications that can easily be mistaken for a vintage year. Alvaro Domecq’s 1730 series is a good example: the label states 1730 Amontillado but this refers to the foundation year of the bodega (in fact a different bodega, which started this wine…). In other cases, like the Alvear PX 1927, they mean the foundation date of the solera. Dios Baco’s Oxford 1970 is another example. Even though there’s usually fine print explaining the date, it’s confusing and I think the Consejo Regulador should regulate it better.

It gets even more complicated when you look at the Lustau Almacenista 1918 matured by Pilar Aranda y Latorre. It clearly says Añada 1918 at the top of the label and then solera matured by… as well as 1|39 which means it was blended from 39 barrels. This is frankly impossible: it’s either solera matured, or a vintage. Lustau kindly confirmed that it is not a vintage wine: the solera was started in 1918 but the wine was bottled in an era when labeling wasn’t regulated as it is today. The same goes for their Almacenista Oloroso Añada 1930 which says solera 1|1 – a single cask filled by Emilio Lustau himself and matured in the old bodegas in the Plaza del Cubo.

Old bottles of the Jerez Sibarita from Pedro Domecq also stated Añada 1792. Later bottles clarified that it is actually the foundation date of the solera system.

As a side note, don’t confuse vintage sherry with sherry from a dated bottling. En rama sherry can be labeled ‘Spring 2012’ for example, but this is a dated saca or bottling from a solera – it marks the end of the maturation process rather than the beginning.

Recently a couple of young winemakers are going back to the idea of vintage sherry. They underscore the idea that the solera concept is a fairly recent invention and not as traditional as we think. This implies the vintage sherry idea is now seen as something modern and novel, whereas it used to be the common production method. They also think the sherry region should focus more on terroir and expressing the unique characters of subsequent harvests by producing vintage sherry. Both ideas had been important until the 19th century but they were lost in favour of the consistency of a solera.

Ramiro Ibáñez produced a Manzanilla de Añada 2012 for Bodegas Callejuela. His friend Willy Pérez produced a Fino Barajuela 2013. Two promising winemakers (see this article for more information) that are in the forefront of the renewed interest in vintage sherry.