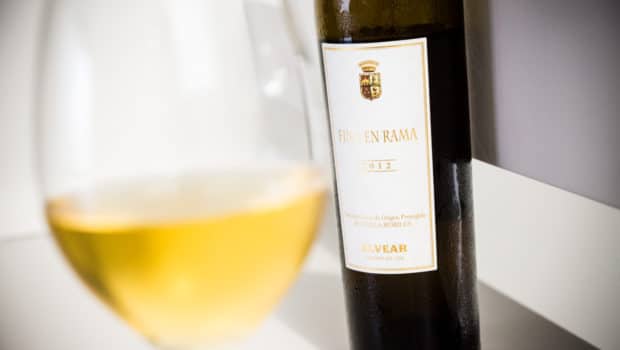 The Fino En Rama from Bodegas Alvear was supposedly the first vintage Fino produced, at least in modern history.

Like other wines in Montilla-Moriles this Fino is produced from Pedro Ximénez grapes without fortification. This supposedly adds to the complexity of the wines, although I wouldn’t generalize it. In any case it is a recent bottling and the En Rama treatment means it should be alive and kicking.

Nose: very intense, with lots of dry aromas (hay, almonds, hazelnuts, a little burlap) but also a slightly bigger sweet-and-sour citrusy note than what you’d expect from a Jerez Fino. Big yeasty notes, with hints of freshly baked bread. A powerful, rather complex blend of austerity and roundness, well succeeded.

Mouth: pungent attack, with plenty of olive brine and salty sea spray. Not too dry – again it’s rather grapey and fruity but with a slightly lower acidity now. Olives, lightly toasted notes, almonds, also a mineral touch. The savaouriness and saline spikes are quite impressive. Wide, long finish, with a refreshing bitterness and herbal note.

Availability: limited, but they regularly bring out new vintages. I bought mine from Vinos.de where it cost € 8. Now sold out there, so try Vinissimus. Only 50 cl bottles.

Summary: A really good Fino, with an above average citrusy side and plenty of intensity. Perhaps a little rounder than some examples from Jerez, but this Montilla wine is certainly on the same level.