In 1835, infected by the sherry boom of his time, Manuel María González purchased a bodega (now known as La Sacristia) in Jerez. Although initially conceived as a pure trading house, he started to explore the production of wine and in 1844 the first own vines were added. In 1849 Manuel Maria Gonzalez created his own brand Tio Pepe, the first registered trade mark in Spain in 1888. Then just a small solera with three criaderas, the name was a tribute to his uncle, José Ángel y Vargas, who strongly supported him and tought his nephew pretty much everything about vine cultivation and winemaking. Today Tio Pepe is distributed to more than 115 countries around the world as one of the best-selling Finos in the world.

In 1855 he built bodega La Constancia and the estate was so successful that González associated with his British trade representative Robert Blake Byass. This was the foundation for today’s largest sherry producer Gonzalez Byass. Today the firm owns about 650 hectares of prime sherry vineyard, many of which in the Jerez Superior area, and extensive vine nurseries. 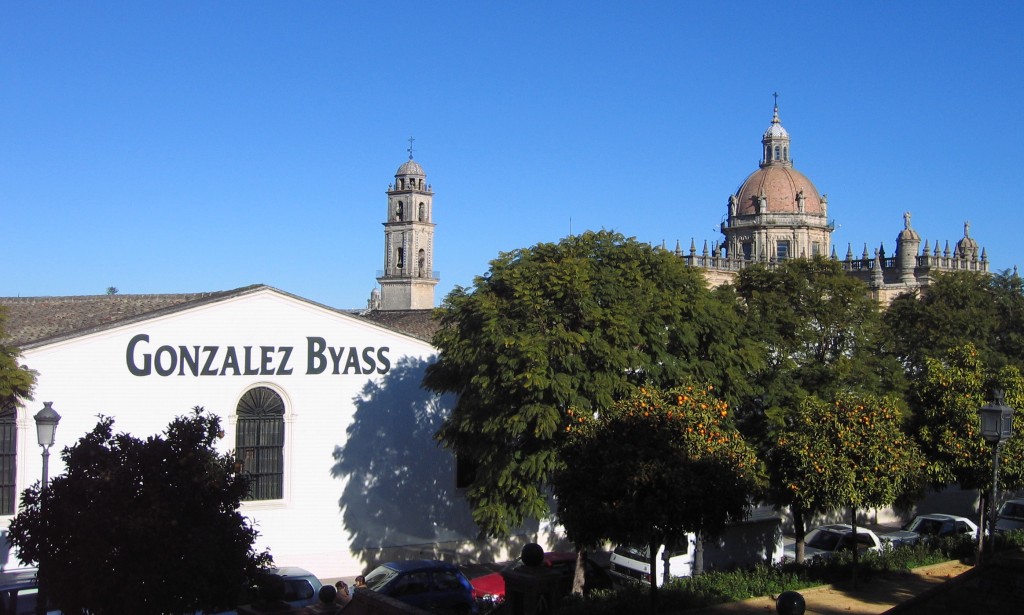 
Not only was the Gonzalez family at the forefront of sherry winemaking, they’ve also participated in the introduction of the polo game in Spain, the first grass tennis court, the installation of the first electric lighting and running water in the plant, the first train project in Spain as well as numerous other industrial and cultural innovations. In 1862, when Queen Isabel II visited the firm, the construction of a new bodega called La Concha was commissioned from the engineer Gustav Eifel.

In 1888 the Byass family separated from the winery, but the name remained the same. The famous sombrero-wearing, guitar-toting bottle became the classic image of the Tio Pepe brand in 1935. The mascotte was designed by Luis Pérez Solera who was specialized in advertising for wineries.

In 1963 they constructed the great Tio Pepe bodega, holding 28,000 butts and built on 3 floors. Another bodega was built in 1972, Las Copas, with a capacity of around 80,000 butts. In 1998 the Byass family withdrew from the company. The company is now owned and run by the 4th and 5th generation of the Gonzalez family. In 2004, Gonzalez Byass joined forces with Grupo Vips and opened 8 Tio Pepe restaurants in Madrid, but they were closed in 2011 due to the crisis. In 2008 the company acquired the well-known Viñas del Vero wineries.

In 2020 the company also opened the Hotel Bodega Tio Pepe, the world’s first sherry hotel, a small boutique hotel in the historic centre of Jerez, in between the bodega and the cathedral. It is a combination of four buildings that used to belong to bodega workers. Of course there are several options to enjoy food and wine in the hotel’s bar and restaurants as well.

Gonzalez Byass have an extensive range of sherries, from low-end products to high-end, old wines.

The bodegas are the most visited in Europe, and among the most interesting. Tours in different languages.