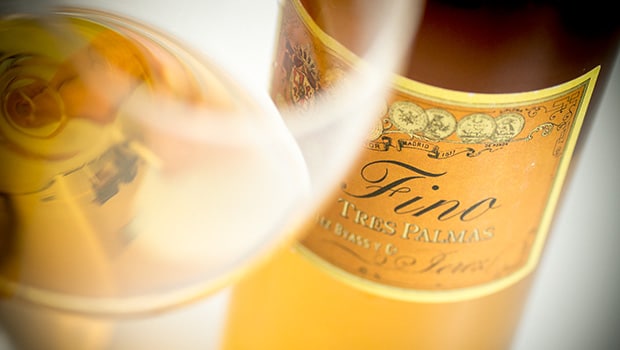 Read a general introduction to the Finos Palmas 2013 here.

Fino Tres Palmas is 10 years old and the layer of flor is slowly falling apart into patches. It’s rare for a Fino to retain an active layer of flor this long, this is really a Fino at the edge of becoming Amontillado.

Tres Palmas is taken from the same solera as Dos Palmas in the Gran Bodega Tio Pepe, but in this case from one single butt #30 in the 1st criadera (the layer right above the oldest layer).

Update: read my review of the Fino Tres Palmas – 2016 edition

Nose: Fino Amontillado alright. I love this crossover between the subdued Fino aromas (a chalky minerality) and the luscious caramel / butter toffee of the Amontillado side. Something of half-dried apple chips and apricot marmalade. A lot of (unsalted) almonds, also hazelnuts. Hints of toasted bread and even vanilla. There’s also a solventy / polished note already, though much less noticeable than in Cuatro Palmas for example.

Availability: primarily sold in the UK and Spain but other selected markets have a small allocation as well. Around € 30 for a 50cl bottle.

Summary: With elements of both Fino and Amontillado, it's clear that Tres Palmas is a complex wine. It falls in between stools, but sometimes that's exactly what we're looking for.