Don’t forget to give old bottles enough time to settle down, sometimes even a few days

Two years ago I bought four bottles of Lustau sherry from a Belgian wine lover. They had been lying around in his cellar since the mid 1980s and they were bottled for D.I.V.O. – Club International du Vin, a Swiss wine club, operated as a kind of mail order company back then. They seem to have had a whole list of proprietary Lustau bottlings in the 1980s and 1990s, I’ve also seen references to bottles of Fino Jarana and Manzanilla Papirusa with their name.

This Oloroso Reserva 1|2 was drawn from a solera of just 2 butts of Viuda de Antonio Borrego which obviously refers to Doña Pilar Plá Pechovierto, one of the strong women in the sherry industry. The bodega that is now called El Maestro Sierra was founded by José Antonio Sierra in 1830, but he died without children so it passed onto his wife’s niece, the mother of Antonio Borrego. Pilar Plá followed her husband to Jerez where they built a great reputation for the bodega in the Plaza Silos. In 1976 Antonio Borrego died and Doña Pilar ran the business. 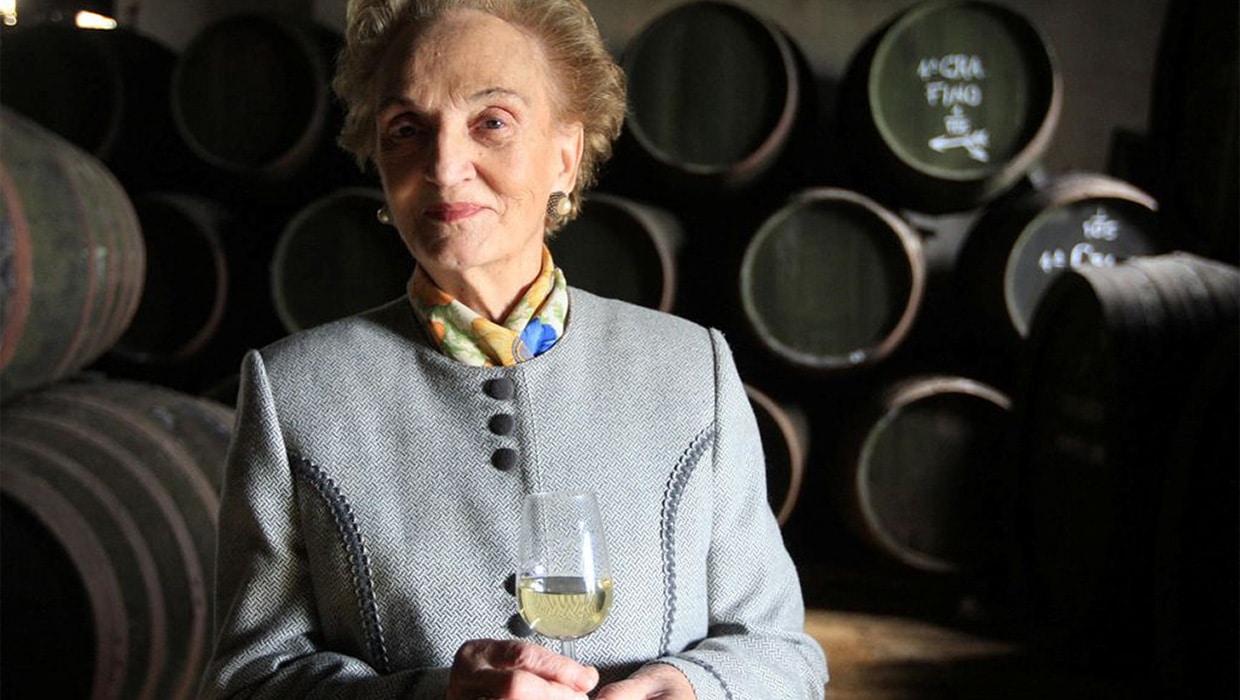 Although El Maestro Sierra trasnformed into a shipping bodega since 1996, most of their history was as an almacenista, nurturing wines that were then sold to larger bodegas. She supplied González Byass with Fino and Domecq with Oloroso. After the demise of Domecq the Oloroso moved to Emilio Lustau. Kind of a precursor for the well-known Almacenista series which is now one of the key pillars of the Lustau range. Later Lustau also had an Oloroso bottling from a 1|138 solera at this bodega.

Well over 90 years old, Pilar is still looking after the bodega, now with her daughter Carmen Borrego Plá and catapaz Ana Cabestrero.

Nose: when I first opened the bottle, it was quite reductive with very, very meaty notes and whiffs of sulphur and drain odours. This settled down after a day and disappeared after a week or so, with the fruity notes coming to the fore (red berries, raisins, fresh figs and baked apples). Light heady notes (polished oak and orange zest). Rather fresh. In the background there’s some toffee and Turkish coffee. I assume it has lost some of its aromatic wideness but this is still very good.

Mouth: still in good shape. Full and dry, with raisins and caramelized notes and good acidity. A light charred note, as well as some Mediterranean herbs. Herbal notes tend to appear more clearly in very old bottles. Maybe a little softer / flatter than it once was. Rich peppered chocolate and coffee in the aftertaste. Very pleasant to drink, still plenty of power and deep, dark aromas. I assume it may have been ever better in the past, but it’s always great to try such a piece of history.

Availability: I’ve only seen this once…