After the demise of cheap, sweetened sherries in the 1980’s, there was a trend to commercialize older sherry. In an attempt to set their premium wines apart, bodegas came up with a whole list of vague and ambiguous age references on labels, such as Muy viejo, Viejísimo or Very Old Sherry. During the 1990’s this became a serious problem as it was hard for consumers to know what they were buying exactly and how one sherry compared to another in terms of maturation.

The Consejo Regulador tried to end this ambiguity by introducing stricter rules, with fixed age boundaries. The aim was to officially guarantee a certain age and quality, rather than allowing a categorization chosen by the producer. The solution was found in a VOS and VORS label. The rules were set in 2000 and the first wines were accredited in July 2001.

Although at first there was a certain reluctance among producers towards the higher transparency, in the end they realized that these labels introduced new marketing opportunities as well and allowed the really old wines to have a better exposure. 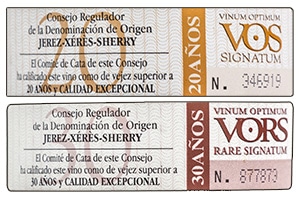 The problem is of course: how can you prove the average age of sherry when it is a mixture of hundreds of wines passing through a solera system for many years? It would be an incredibly complex formula which needs to take into account the starting date of the solera, the age of the starting wines, the refreshment rate of the solera, the number of scales, the amount and volume of all bottlings, etc. This is an impossible task, especially when dealing with soleras started centuries ago, when all these elements weren’t tracked or noted down as they are today.

To overcome this problem, the Consejo Regulador agreed on a specific process to evaluate each wine. It consists of three major elements:

The tasting committee gets to try the wine and is also presented with a reference sample that was saved from the last assessment. The committee evaluates the organoleptic qualities of the wine and the evolution from the last sample. For most wines this is just a formality. Less than 20% of the wines are rejected and most of these are sweet wines (Pedro Ximénez or sweetened Oloroso), which are harder to categorize because the sweetness makes them seem younger sometimes.

Note that a VOS / VORS label is always given for a specific bottling (“saca”), not for the solera as a whole or for a certain brand name. This means that every new batch of the wine will have to pass the tests again in order to maintain the age designation. After it has passed, the bodega can buy official VOS / VORS stickers with a unique number.

Less than 1% of all sherry wines on the market get a VOS or VORS label.

Not everyone agrees with this system and some producers choose not to use it at all. Let’s have a look at some of the objections that are heard most often:

Note that even with the criticism, the VOS / VORS system is now widely accepted and used by most bodegas to give their products an extra marketing asset. In most cases, there is a proven effect on the sales of bottlings that are guaranteed as VOS or VORS.

The bottom line for the consumer should be the high general quality of the wines that are accepted. This is beyond doubt: all sherries with a VOS or VORS label are highly reliable, unique sherries of the highest standards. It’s all about trust and the system certainly accomplished this. On the other hand, we should keep in mind that there are also exceptional sherries without an age label…

In 2005, two other age statements were officially recognized by the Consejo Regulador: 12 Years old and 15 Years old. Until recently they were not frequently seen on the market, but more and more bodegas are picking it up. Some of the advocates are Bodegas Williams & Humbert who have a 12 years old Collection series and a Dry Sack 15 Years old, or El Maestro Sierra with their Amontillado 12yo and Oloroso 15yo. Barbadillo has also introduced the 12 Year Old statement on most of its premium wines as did Diéz-Mérito for their Bertola range. There’s no special sticker or icon, it’s just the possibility to print the age on the label which is otherwise not allowed.

Both age statements seem rather arbitrary perhaps, and it’s strange for bodegas to be able to mention two specific ages but not ’14 years old’ or ’18 years old’, although this would be just as easy / difficult to prove. Under 20 years, C-14 dating becomes unreliable, so the only possible proof is a written track of solera manipulations, something bodegas are often unable (or unwilling) to expose, which explains the limited popularity of these age statements compared to the traditional VOS / VORS categories.