Let’s start with the name: Fino Imperial is not a Fino, but a very old Amontillado. The wine originated in 1793, possibly at the lost bodegas Ysasi y Cia. which are also responsible for the Oloroso Regina Victoria.

It was acquired in 1900 by bodegas Díez Hermanos (established in 1876), which later merged with the bodega Marqués del Mérito to become Bodegas Díéz-Mérito. The name may be a little confusing, but it stresses the fact that it is seen as a long-aged Fino. As the brand was registered even before the D.O. Jerez-Xérès-Sherry was founded, it is not considered to be conflicting with current-day regulations. 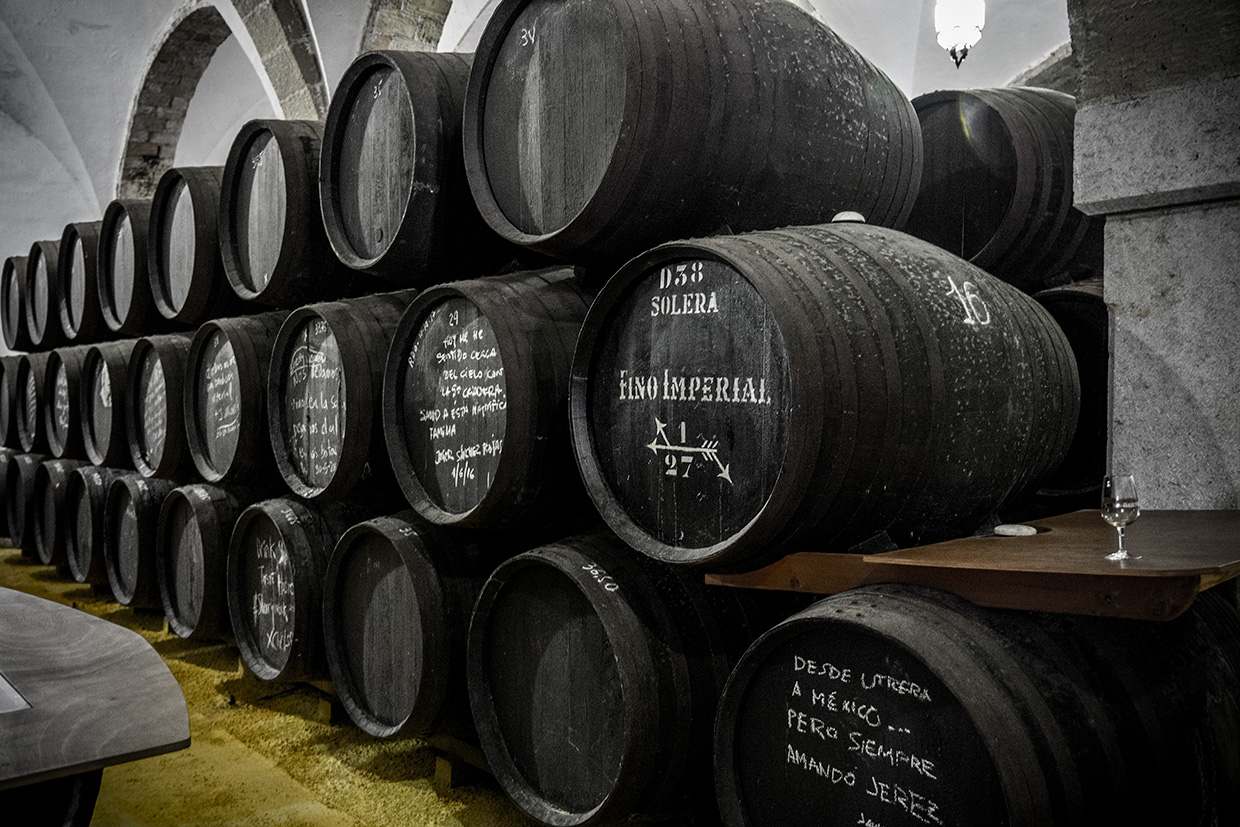 The 27-butt solera of Fino Imperial

The Fino Imperial solera is fairly compact: just 5 criaderas and a solera row of 27 botas. This wine is first aged biologically (15° alcohol, under a layer of flor) for around 5 years in the two youngest stages of the solera system. From the 6th year it ages oxidatively in four additional stages. It looses its flor in a natural way and progresses without a second fortification, just one of the very few still in existence today.

When it reaches the solera row the average age is well above 30 years (VORS category) and it has concentrated through evaporation to 18° alcohol (fairly low, remember it is not re-fortified).

At some point it was refreshed with Manzanilla Pasada rather than Fino (like Valdespino’s Coliseo by the way), in order to maintain its character, but nowadays they use a mature Fino.

The Fino Imperial can be hard to track down, even in the sherry region. The solera is run at a very slow tempo, with very limited sacas of +/- 200 bottles at a time.

We’re very lucky to have this wine as part of the #SherryTT 2019 Twitter tasting, in which we’ll have five Amontillado wines and explore the wide range of characters that exists in this category. You can still apply and try it with us during Sherry Week.

Nose: a luscious, elegant nose. There’s a great perfumed side to it, with floral notes, walnut cake and leathery touches. Traces of volatile acidity, even a light hint of smoke. Unmistakably old. Classic almonds and lovely tobacco leafs. Dried apricots and orange peel. Light hints of Belgian speculoos. In the background there’s still the pungency and flor character (hay) of a Fino, but all the edges have been rounded off. So great.

Mouth: very fresh, with a smooth texture and fairly high acidity adding juiciness to the whole. After the initial lemony attack I find walnuts and hazelnuts, soft Mediterranean herbs and traces of old oak. Some caramel and tobacco again. Lengthy finish, highly sapid with some spicy touches.

Availability: around € 75 for a 50 cl bottle. Quite hard to find abroad, try Bodeboca or Lavinia for instance.

Summary: A terrific wine. Very juicy, with a fairly high acidity but not the astringency that you sometimes get in really old Amontillado. Stunning complexity. Serious sherry lovers should have this on their bucket list.