Younger is a relative concept of course. The whole range of sherries from Tradición is VOS or VORS and they follow the same philosophy for their Brandy de Jerez. The brandy Solera Gran Reserva has an average age of around 25 years old.

It is a mix of holandas and higher strength aguardientes, acquired from different almacenistas and cellars in Jerez, and matured further in a solera of casks that previously contained their Oloroso VORS sherry. Less than 3.000 numbered bottles are available each year.

Mouth: again drier than most other brandies. Big oaky notes, which mixes with caramel, raisins, prunes and walnuts to form a bittersweet profile. Smooth and concentrated at the same time. Hints of herbal extracts (thyme, sage) and cough syrup. Some liquorice as well.

Availability: rather limited. Around € 60 for a bottle. Available from the importers of their sherry. Try Lavinia for instance.

Summary: This Brandy Tradicion is a significant step up from most other Brandy de Jerez, especially if you appreciate a slightly drier style. It's a profound brandy with lots of complexity. 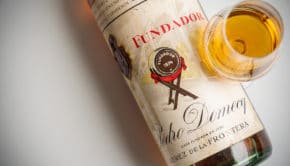