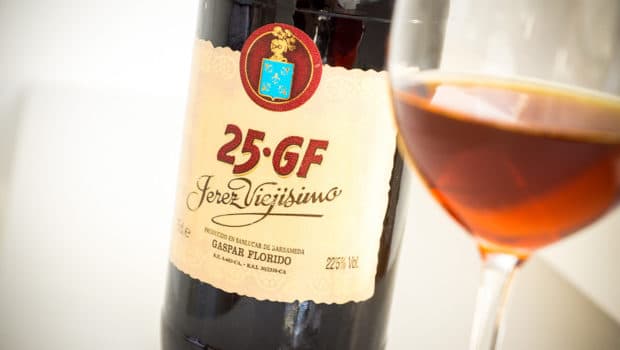 This is a legendary wine, among the oldest of the region. The winemaking origins of the Florido family go back to around 1880, in a bodega Florido Hermanos that was later taken over by Pedro Domecq. In 1942 Francisco Florido restarted the sherry wine activities, mostly working as an almacenista, followed by his son Gaspar Florido Cano. He managed 33 ha of vineyards in the Viña el Armijo (Pago Miraflores) and ran the old bodega in the Calle Rubiños in Sanlúcar de Barrameda.

In 1997 he decided to bottle his own wines and became known for his very old wines, two of which are particularly famous. The first is this 25-GF (the number indicates the number of barrels in this solera), a wine of up to 80 years old. The second was 30-GF, a wine that was probably even a bit older (but which I haven’t even seen in pictures).

Having originated at Rodriguez La-Cave (see Quo Vadis?), they have always been known for their high quality… and price.  One bottle of 25-GF was sold for around 20.000 pesetas in the bodega (€ 120) – remember this is the 1990s when other high-quality sherries were € 25 at most. Sales tactics that worked: everyone wanted to know about this crazy wine.

In the early 2000s Gaspar Florido (who had no children) felt the urge to sell his premises in the old town centre and moved his wines to the outskirts of Sanlúcar, in the Carretera de Trebujena. In 2007 Pedro Romero bought all of them for € 6.5 million, moved them back to the town centre and kept bottling them with the same name. A couple of barrels were bottled in the La Bota series by Equipo Navazos (numbers 41, 47, 48, 49, 51). After the tragic end of Pedro Romero, the wines are now in the Bodegas Alonso who seem to be quite frugal with these gems.

Both 25-GF and 30-GF simply have Jerez Viejísimo or very old sherry on the label. Gaspar always said that sherries of such age started to merge in the sense that the usual classification of Amontillado, Palo Cortado or Oloroso becomes blurry and irrelevant. There is certainly an element of truth in this: the differences between these types come down to the influence of biological ageing, but can you still sense the flor when you add 70 years of oxidative ageing? Actually we believe you can, but indeed it has a lower impact on the character.

Nowadays it tends to be qualified as a Palo Cortado (or Jerez Cortado as they often say in Sanlúcar), although historically most people argued it was closer to an Amontillado.

Nose: very aromatic, you could call that Oloroso. Toasted almonds, plenty of polished furniture and smooth leather. Saline notes. Dates and something caramelly in the background, as well as lime, candied lemon, figs and blackberries. Soft traces of smoke as well. The polished, volatile side (with hints of nail polish remover) and the citric side (ponzu sauce) are wonderful. Together with the traces of acetaldehydes it comes closer to an Amontillado, I’d say, until you notice the sweet spices and pastry notes again. There’s also a mushroomy / sweaty / vegetal note that I’m less fond of, but this may be caused by the long storage, and it tends to disappear after airing. In any case: very complex and full of character.

Mouth: very potent and dry but also quite fresh and juicy, with a racey acidity and some briney notes. Same hints of toasted nuts and old, varnished wood with burnt edges. Some walnut bitterness. Still some umami notes, olive juice, cellar dust and hints of dark treacle underneath. Also a light red berry sweetness. It feels much more integrated than the nose. Although it has similarities to the La Bota releases, this one comes accross (slightly) less astringent.

Availability: long gone. Recently some bottles found their way to auctions, fetching around € 150, or even more. Expensive of course.

Summary: A special wine and a great testimony to the work of Gaspar Florido, one of the most interesting almacenistas in Sanlúcar. It (almost) lived up to the hype it created itself - I feel lucky to have secured a few bottles.