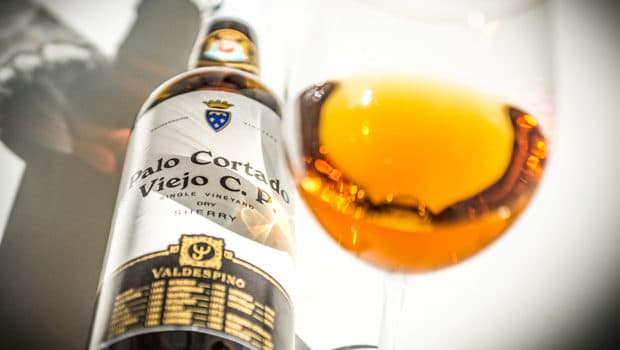 Viejo C.P. stands for Viejo Calle Ponce, a reference to the street that housed a bodega which was acquired by Valdespino in the 1960s. However the bodega had fallen into serious disrepair and Valdespino moved all of its barrels to a modern facility on the outskirts of Jerez in the early 2000s.

Unlike most other Palo Cortados, the creation of this one is well documented. They select the most delicate casks from the ninth criadera (the second stage) of their Fino Inocente and Amontillado Tio Diego soleras and fortify this mixture to around 18° to stop / further prevent the growth of flor. It then enters the Viejo C.P. system, with one solera and four criaderas, where it will complete the oxidative ageing process and soon turn from Fino / Amontillado to Palo Cortado.

As Viejo CP is fed from Inocente and Tio Diego, it shares their old-school approach. It is a single vineyard Palo Cortado from the pago Macharnudo Alto, made from barrel-fermented musts. Its average age is estimated to be around 20-25 years.

Viejo CP in turn feeds an older solera system, that of the Palo Cortado Cardenal, a wine that exceeds 50 years of age.

Quite an orange hue. Nose: very rich and complex. I get the Oloroso side first: more than a hint of toffee / caramel sweetness, dried figs and almond paste. Hints of roasted coffee. After a while the Amontillado side grows stronger, with some iodine tingle, subtle acetaldehydes and a light citric tang. Also waxy notes, a hint of balsamic and exotic spices. There’s a hint of damp cellars as well. Pretty great, it shows a high intensity but everything is perfectly balanced.

Mouth: intense again, with a typical buttery feel. Nonetheless it is not particularly heavyweight, as it focuses on the tangy, mineral feel of Amontillado. Bone dry with a fairly high acidity. Orange peel, lots of hazelnut and walnut (skins), merging into bittersweet grapefruit. Candied lemons. A little olive brine and toasted bread. Really mouthwatering. Fades on polished wood, with a medium long finish.

Availability: bottlings are highly limited, and even when you’re able to find it, it’s often out of stock. Around € 35-40.

Summary: Viejo CP is a fascinating wine, bottled at an age that shows best what Palo Cortado is all about, in my opinion. Overall I'd say it is closer to Amontillado than Oloroso. One of my favourite Palo Cortados, it can be hard to get but it's worth tracking down.