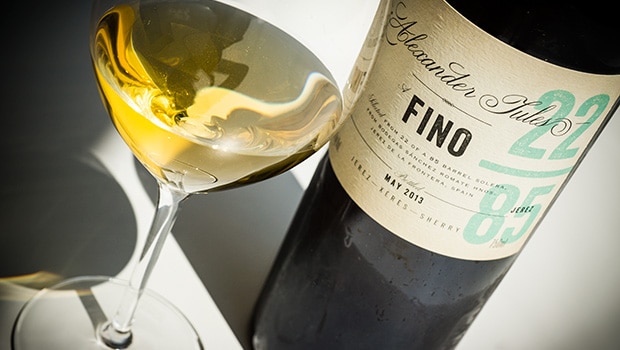 The independent bottler Alexander Jules had two wines from Bodegas Argüeso among his first releases, but also this Fino 22|85 that was sourced from the Solera Celestino at Bodegas Sanchez Romate.

It’s the same 85-butt solera that provides the wine for the Fino Perdido, bottled for the Wine Society in the UK. Mind that both have selected a different set of barrels from that solera, so the end result is not really comparable. Apart from these expressions, the solera isn’t commercialized, so they’re providing us a unique insight in this part of the bodega.

Fino 22|85 was aged for around 8 years before being bottled en rama in May 2013, so it had some time to settle in the bottle. I’m sure it could have aged a few more years in the bottle, but we’re just too keen to try it. It’s the oldest Fino solera at Romate. In fact this would have been called a Fino Amontillado (something in between) before the Consejo decided this term should not be used any more.

Nose: quite pungent indeed, with lots of mature flor notes. The farmy notes are very pronounced: drying hay, wet animal fur, some earthy notes and decomposing vegetals… I really like that. Subtle (overripe) fruits, quinces I’d say. Lime leaves and a dash of honey. Hints of flan catalan. Finally a few oaky touches and a dryness of cinnamon bark. A Fino slowly developing early signs of the Amontillado character.

Mouth: the usual briney notes are still there, but in a softer way. They are joined by a gentle peppery heat. Nutty notes (almonds, hazelnuts). There’s obviously less vibrant freshness than in a young Fino, but the savoury, warm and bready profile is really nice. A great mix of elements. Almondy, yeasty finish.

Availability: old Manzanilla Pasada is relatively easy to find, but old Fino is rare – Fino is usually bottled at a younger age. A nice equivalent of Dos Palmas or Tres Palmas. Around $ 40. Only available in the US for the moment.

Summary: Older Fino can really show a grandeur and savoury intensity that is different from a standard Fino. This one is a great showcase for these kind of aromas. Let's hope in the future Alexander Jules becomes available this side of the ocean.