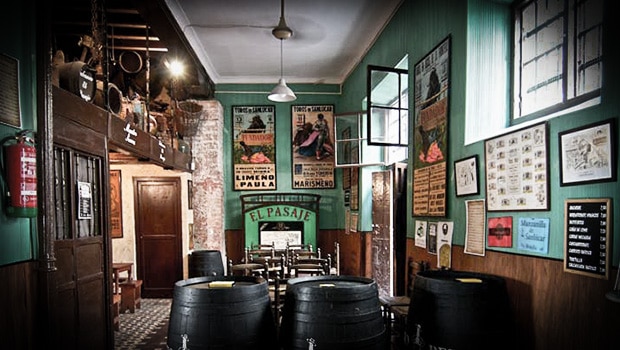 Tabancos are typical Andalusian premises. A tabanco was half tavern, where you could have a drink or eat some tapas, but also half wine shop, as they used to sell wine in bulk as well. While this is rarely the case any more, nowadays the essence of a tabanco is serving all kinds of sherry directly from the barrel. Usually they’re also supporting other long-standing traditions like live flamenco music.

The name tabanco dates back to the 17th century, and unites two types of shops, estancos (state-run shops that sell stamps and alcohol among other things) and tabacos (cigarette shops). Eventually these places became more than just a shop and people started to hang out there. Some of them didn’t have a real bar, just a couple of tables and one or more casks. The name is unique to Jerez but similar premises existed all over Andalusia.

Most of the tabancos were getting their wines from partner bodegas, sometimes functioning as the home bar for bodega workers. Other tabancos were taking care of maturation for the wines themselves, thus acting as an almacenista at the same time (e.g. Obregón in El Puerto de Santa María).

Most of the time tabancos have a rustic interior, with typical tiles and a general old-time charm that seems to be lost in other types of taverns. There used to be hundreds of tabancos in the Cadiz area, but their number declined for many years until early 2000’s only a handful of tabancos was left, the best known being Tabanco El Pasaje (which serves the wines from El Maestro Sierra) and Tabanco San Pablo (which serves Valdespino).

Since then, despite (or rather thanks to) their retro atmosphere, there has been a significant revival of these places, also among young people, and the number of (neo-)tabancos is rising again. La Pandilla, Tabanco La Bodega, Tabanco Romate, La Sureña, Plateros, Las Banderillas, El Guitarrón de San Pedro, Tabanco Obregón etc… you can find a list and some reviews on this website. There’s also a small tabanco route through Jerez, more information is found here.

Tabancos have become so fashionable that recently they also started to pop up in other parts of the world. The city of London has been at the pinnacle of this development. Besides authentic tapas bars or Spanish restaurants like Bar Pepito, Capote y Toros or Fino, which serve different types of sherry by the glass (but not from the barrel), the first real London tabanco opened in October 2013.

In fact Drake’s Tabanco is probably the first place outside of Spain where you can get sherries from the barrel (from Bodegas Fernando de Castilla among others), some of them unfiltered (en rama). They serve Spanish food but they have a big focus on sherry, including a tasting menu with sherry pairing. I’ve visited Drake’s Tabanco a couple of weeks ago, and I’ll post an in-depth review asap.