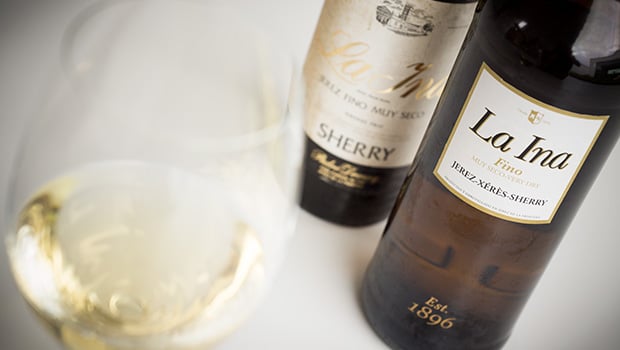 After the liquidation of Pedro Domecq, Lustau bought six of their bodegas and the rights to some of their brands, including the popular Fino La Ina. While Lustau moved most of the Domecq soleras to their own premises, the 4200 cask solera that holds La Ina still resides in the old Domecq building. Lustau is afraid moving them would alter their precious character too much, although they have now identified another bodega with very similar characteristics, so La Ina may be moved in the near future.

Travelling back in time with two bottles of La Ina

La Ina is usually the highest rated Fino wine in the Guia Peñin and one of the most popular Finos in Spain. For this review I’m trying a recent bottle bought in 2013 head-to-head with an old Domecq La Ina, bottled in the 1970’s.

In recent bottlings La Ina is around 6 years old.

Nose: much cleaner than the old version. Certainly a younger wine. Very vibrant, with surprisingly bold acetaldehyde notes (apples), rising dough and some farmy hints (stable odours, hay, wet fur…). Tiny notes of sea spray. The longer you wait, the more it will move towards fruity notes. Not a beginngers nose, but certainly one with plenty of character.

Mouth: the first attack is bright, with a nice acidity, but it remains quite silent at first. After a few moments it bursts open with lots of freshly cut green apples and secondary lemon. Walnuts. Yeasty notes. A slight zesty bitterness of grapefruit towards the end. A little austere.

Availability: very good, just like the other Lustau products. Around € 10 for a 75 cl bottle.

Summary: A classic Fino. Especially the austere elements are highlighted, which makes this a slightly erudite Fino, more than an easy sipping sherry. A great example of the unique character of Fino sherry.