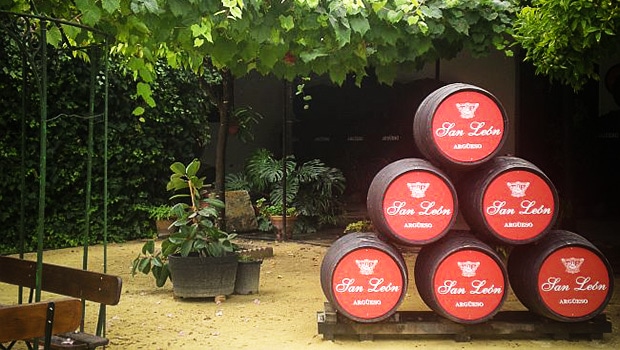 Bodegas Argüeso was founded by Mr. León de Argüeso y Argüeso in 1822. Originally from Burgos in the North of Spain, he settled in Sanlúcar, where he opened a small grocery store called Almacén del Reloj. A couple of years later he acquired some old barrels and the cellar San Jose in the alley of Santo Domingo, whose age is estimated at more than 250 years.

León was never married and after his death he left his business to his nephew Juan and niece Francisca. Hence the full name of the company: Los 2 herederos de Don León de Argüeso or Two heirs of Argüeso. The business was gradually expanded, adding wineries around the original core of the Bodega San Jose and opening the whole main facade facing the Calle del Mar. Nowadays the compound spans almost two blocks with a total of 13.500 square meters. It includes spaces from the former convent of Santo Domingo as are the warehouses “El Refectorio” and “La Sacristía” which are covered with magnificent polychrome coffered ceilings from the sixteenth century.

In addition to the headquarters in the Calle del Mar, Argüeso also a modern vinification plant and cellar San Lucas on the road to Chipiona, which was acquired in 1992. This also includes the bottling plant.

In 2016 Argüeso was taken over by Bodegas Yuste who also owns Bodega Miraflores and the former Pedro Romero.

Argüeso’s strength is definitely in its Manzanilla. They have a range of four expressions:

They also produce a white table wine and sherry vinegar.