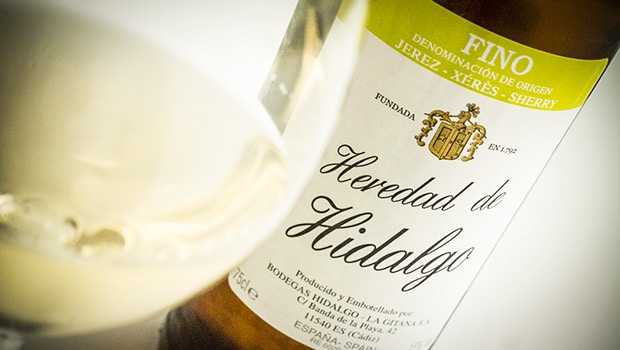 A € 3 Fino, sold by Hidalgo – La Gitana but produced by a different bodega

Heredad de Hidalgo is a low-end range from Bodegas Hidalgo – La Gitana. It includes a Manzanilla, Fino and Cream sherry. In most of the books on sherry, this range isn’t even mentioned. It seems to be distributed mostly to supermarkets and wine stores that are looking for a cheap wine to fill their racks.

Hidalgo – La Gitana is located in Sanlúcar de Barrameda, which means their signature wine is Manzanilla. In order to sell a Fino, they must have bought the wine from another bodega outside of Sanlúcar. I tend to avoid these kind of wines, I can’t imagine a bodega would ever sell its best wines to other bodegas, so if the bodega is based in Sanlúcar, go for their Manzanilla… I don’t want to generalize but this is usually what they do best.

Nose: rather fruity and young, with hints of plain white wine. Apple aromas, quinces, a few sour / acetic hints as well. Some farmy notes – they can be nice but they feel misplaced combined with the fruitiness.

Mouth: light and fairly acid, again quite fruity at first. Apples and citrus. Becomes more saline after a while. Some flor influence and a clear bitterness. Limited depth and a medium finish.

Availability: Spanish supermarkets or cheap wine stores. In Spain this can often be found for around € 3. In other countries, expect around € 9-10.

Summary: The supermarket pricing and the fact that a Sanluqueño bodega presents a Fino should have been clear warnings. You'd better avoid these kind of wines, nowadays there are much better Finos to be found. Not representative for the quality of other ranges from Hidalgo - La Gitana by the way.