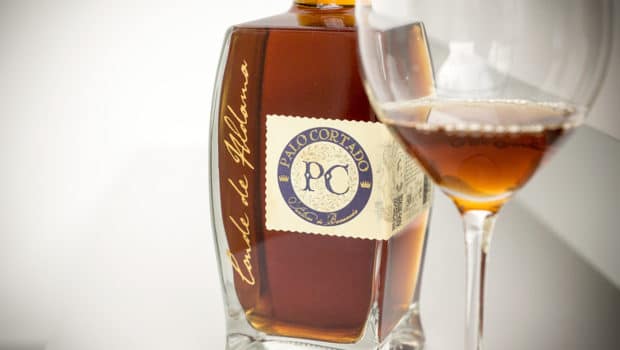 In the late 19th century the Aldama family was among the most prominent in Sanlúcar de Barrameda, with vast vineyards and stock holdings. In 1888 the phylloxera plague was advancing towards the Jerez region and the Conde de Aldama decided to seal his best botas in plaster to protect their value and to prevent their mixture with wines from new, grafted vines.

These botas, which were part of a solera started around 1750, remained sealed until their re-opening in 1927. At that time the Aldama heirs were facing bankrupcy as well as personal tragedy and started liquidating their stocks. Until the acquisition by Francisco Yuste in 2001, only the natural evaporation had been replaced, which means the wines were left untouched for almost 120 years.

There is an Amontillado ‘Conde de Aldama’ and a Palo Cortado. Both originated in the same solera but some casks saw a slightly different evolution with more traces of Oloroso, hence the classification as a Palo Cortado although they essentially share the same DNA. Their estimated average age is probably well over 100 years (making it one of the oldest available)! As this is much older than the VORS requirement of 30 years, the bodega doesn’t bother getting an official label. Only 8 butts are available of this Palo Cortado ‘Conde de Aldama’ – bottlings are very scarce.

Nose: very expressive nose, intense aromas of polished oak, toffee and candied fruits. A myriad of secondary notes arises, like salty caramel, cigar boxes, sea breeze, subtle herbs, dried mushrooms, forest leaves and cinnamon. Also a few heady notes, like an old cognac. They call this a “handkerchief wine” because it can work as a perfume.

Mouth: dry and fairly saline, quickly balanced with toasted oak, almonds and roasted hazelnuts. Hints of dried figs, but the sharpness and coastal character of its Sanlúcar origins are bigger. Almonds, hints of dried fruits. It combines roundness and sharpness, and the end result is perfectly elegant and balanced (contrary to some other examples of equally old wines).

Availability: around € 80 in Spain.

Summary: This Palo Cortado 'Conde de Aldama' is still closer to Amontillado than Oloroso, I'd say. It's an outstanding example of a very old sherry that managed to maintain its drinkability, complexity and finesse. Delicious.