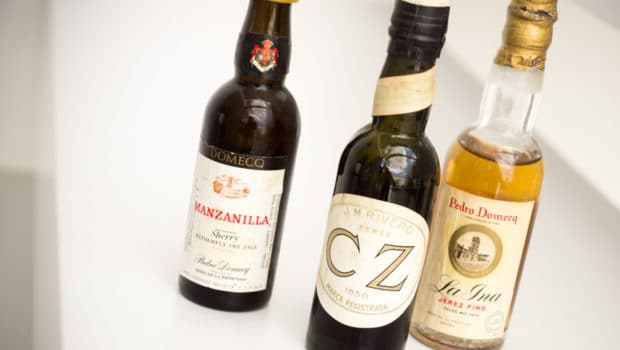 Exactly four years ago the first article was published on this website. Time for a small celebration post, something a little different.

Some time ago I bought a lot of old sherry miniatures, all bottled in the late 1960s (the years were stamped in the base of the bottle).

Miniature bottles of sherry is something you don’t see often these days, understandable, probably because our mindset has changed – who would buy a top quality wine in 5 cl bottles? Evaporation, oxidation, deposits and other problems are common in miniatures, which means their shelf-life is generally shorter than that of regular bottles. Most people who trade miniatures are collectors who simply want to look at the old labels. Not this guy though, I want to know what the wines are like, even though I realize chances of getting a palatable wine are fairly low.

I specifically bought these bottles because they contain some highly regarded wines from the well-known (but long gone) bodegas like Pedro Domecq and JM Rivero CZ.

This one had a modern metal screwcap and probably the highest filling level of the lot (take that, corks). Note the high alcohol level – a far more common practice back then.

Nose: gorgeous really. Fresh like a modern Manzanilla, with lots of elements that are closer to an Amontillado – I wonder whether this is due to bottle ageing or just a more mature profile. Fragrant orange peel, subtle polished wood. Caramelized nuts. Still a very nice saline, coastal character underneath. Wet sand, some dried Mediterranean herbs. Lovely elegance and balance – a pleasant surprise.

Mouth: really nice again. The feeling of Amontillado is back: much more woody notes than you’d expect in a Manzanilla. Waxy notes, traces of fruits with a refreshing bitterness. It becomes warmer after a few seconds, with a roasted touch and a slightly spirity edge. The bitterness grows (a bit too much perhaps) but it ends in a fairly short but nicely rounded finish.

Without doubt a very good wine back then, and it survived almost 50 years in a miniature bottle with flying colours. If this had been a full bottle, I would be jumping for joy.

Tiny T cork stopper and a metal foil cover. The cork broke off but I was able to remove it without dropping particles into the wine. A classic Domecq wine of which I’ve tried old bottles from different decades.

Nose: less fresh than I hoped, quite oxidative and meaty with hints of broth. After some aeration it became more elegant, with oranges , hints of sage and big hints of polished wood.

Mouth: some sweet and sour fruitiness, herbal notes, warm oak. Almost like an Amontillado which lost its structure.

This must have been a very good wine as well, but its qualities are now buried in louder notes of oxidation. Or perhaps we should blame the clear glass?

From the bodega founded by Diego Cabeza de Aranda y Zarco (hence CZ) in 1650. The bodega was renamed JM Rivero in 1895 after his descendant married Joaquin María Rivero. The company was sold off in 1994 and a few years later another descendant, Joaquin Rivero Valcarce, set up Bodegas Tradición, recently renamed to Tradición CZ.

The name Trafalgar 1805 was barely readible on the slant neck label, but puzzling a few readible letters and looking at the names of their wines (Solera Cabeza, Tixera, Trafalgar, Fino Rivero, del Carnero, del Cuadrado…) it has to be Trafalgar, which was a Full Golden Sherry. The story goes that a parcel of barrels was being transported at the time of the battle of Trafalgar. They were recovered and Rivero decided to start a new solera with the barrels, hence Trafalgar 1805.

This miniature had a tiny T cork stopper and a metal foil cover. The metal foil was very loose but the cork was intact and seemed airtight. High level.

Nose: well preserved again. Seems a Medium, with some Pedro Ximénez aromas but also a certain dryness to it. Raisins and figs. Nutty aromas and hints of warm wood and a subtle scent of Oloroso fragrance. Nice.

Mouth: a bit funny. It’s full of raisins and dates, but it lacks the sticky, syrupy feeling that usually goes along with it. It shows an excellent acidity too, making this highly attractive.

It seems to have lost a bit of complexity, but after all these years this is still a very enjoyable sweet sherry!

Three very good wines, two of which were more than drinkable after 50+ years in a miniature bottle. I will look at a few other examples in part 2 and part 3.