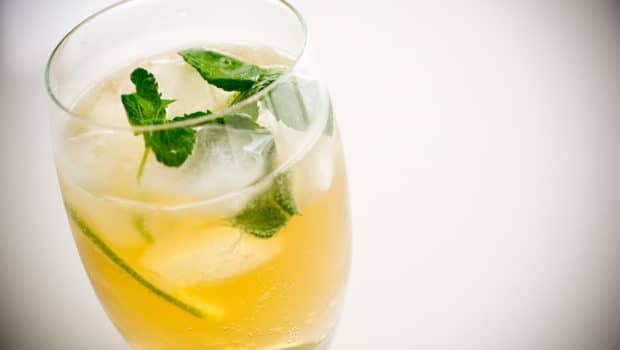 The Rebujito must be one of the simplest cocktails you can make with sherry, but one of my all-time favourites too. Arrebujar means ‘to cover up’ or ‘to tangle up’, so you could translate rebujito as ‘a little mess’ but that doesn’t do it justice. It is the archetypal drink for the ferias of Andalusia.

Rebujito is a mix of Fino (or you can use Manzanilla) with some kind of white lemonade and topped with some mint. Typically you will be told to use Sprite or 7Up, or the Spanish lemon soda La Casera, but personally I prefer to use Canada Dry which adds subtle herbal notes.

The appeal of a rebujito lies in its refreshing taste. The Fino is dry and the lemonade adds the right amount of sugar without overdoing it. Although it contains about the same amount of alcohol as other cocktails, to me it’s much more drinkable, especially when it’s hot. I think it has similar qualities to a gin-tonic, without the spirity edge.

González Byass is promoting its own version of the Rebujito, called Tiojito. They use their Fino Tio Pepe of course, with 7Up.

Different parts of Andalusia have different ways of preparing a rebujito, and each bar will add its own secret touch. Personally I mix one part of Fino / Manzanilla (a basic Tio Pepe or La Guita will do) with two parts of Ginger Ale. You can add a bit more Fino if you like. Fill a large glass with ice cubes (the more ice, the longer it takes to melt), pour the Fino, gently top up with Ginger Ale and stir.

The mint leaves make it even fresher. A slice of lime also works well, although it brings you (too) close to a sherry mojito if you overdo it. If you’re into fruits (Pimm’s style), try adding some blueberries or other fruits.

By the way, Rebujito is a good way to end a bottle of Fino that remained a bit too long in your fridge. It may have lost some freshness but in a Rebujito this usually passes unnoticed.