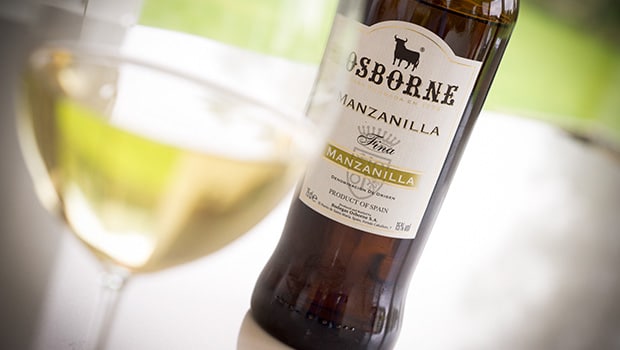 A young Manzanilla Fina adorned by the legendary ‘Toro Negro’

Osborne is one of the best known brands of Spanish spirits producers. Who doesn’t know their iconic logo and the silhouettes of black bulls that are spread over the Spanish countryside? Founded in 1772 by the young English entrepreneur Thomas Osborne Mann, it is one of the oldest firms of wine and spirits in Spain. Osborne produces sherry but they’re also known for port wines, local wines, brandy, liqueurs, as well as olive oil and ham. Their range is so wide that most people may not associate Osborne with sherry right away.

The Osborne headquarters are in El Puerto de Santa María. I couldn’t figure out whether they also have premises in Sanlúcar or whether they buy this Manzanilla from an external partner (I suspect the latter).

From a fresh bottle, released earlier this year.

Nose: not as light and harmless as expected. It has the typical Manzanilla notes of apple and chamomile, but it also shows a faint nuttiness (roasted almonds), minerals and hints of petrol-like aromas. Bread dough and soft iodine. There’s a soft sweetness underneath but overall it’s surprisingly severe.

Mouth: initially a hint of roundness, then a slightly flat middle, but it quickly becomes drier and chalky. A firm bitterness stands out here, think olive juice and grapefruit zest. Quite salty as well. Plenty of character for a supermarket Manzanilla. Medium finish, on brine and lemon zest.

Availability: this range, which also includes Medium, Pale Dry and Cream sherry, is often seen in supermarkets and larger drinks retailers. Usually around € 6.

Summary: Surprisingly characterful. I really like the nose, but on the palate it becomes a little sharp and bitter. It works well with food though, so I suggest to have it with a meal, rather than on its own.