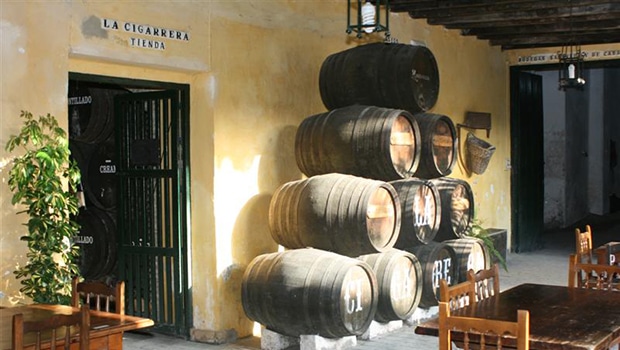 Bodegas La Cigarrera is a small, family-owned bodega in Sanlúcar de Barrameda. It was founded in 1758 by a Barcelonese businessman Don Joseph Colóm Darbó. Together with his son he managed Colom & Compañia, in buildings leased from two monastries. The current bodega was bought in 1891 by Manuel Hidalgo Colom, the great grandfather of the Hidalgo Garcia de Velasco brothers who run the firm today (cousins of César Florido by the way). Manuel Hidalgo Colom started the succesful Manzanilla La Cigarrera.

Due to former regulations of the Consejo Regulador about minimum stocks, the company has always operated as an almacenista, a stockkeeper who sells his wines to bigger shipping bodegas (Lustau among others). In 1997 they started to bottle their own wines. Each year they produce around 11.000 cases of Manzanilla La Cigarrera. It is named after the women who used to sell cigarettes on the streets, in behalf of the big cigarette factories in Cadiz and Sevilla.

After a clustering of different buildings, the company still uses the original bodegas in the Plaza Madre de Dios in the Barrio Bajo (lower part) of Sanlúcar, which cover a total area of 1637 square meters and hold a total of around 500 casks (some of the oldest in town). La Cigarrera consists of three naves (Bodega de Colóm, Bodega de Cabral and Bodega de Samilla) that surround a beautiful central Andalusian patio. The family used to own vineyards as well, but nowadays the sobretablas are bought from local farmers.

Although 90% of its sales comes from the Manzanilla, the house also offers limited amounts of other styles:

Guided tours in English or Spanish.